Cliff's collaboration with the composer Deborah Pritchard and the trumpeter Simon Desbruslais was performed in Vik, Iceland, on Sunday 13 August.

Cliff read his poems and Simon played the new extended version of Deborah's composition Voyage for Solo Trumpet under Steinunn Thórarinsdóttir's Voyage statue, in front of an audience which included the Mayor of Vik and the British Ambassador to Iceland.

The statue is the sister version of the one in Hull, where they performed on May Bank Holdiday as part of the John Grant Atlantic Flux Festival.

Many thanks to the Mayor and people of Vik, and to Steinunn and her husban Jon, for their generous support and excellent hospitality.

There will be another performance of Voyage at the Humber Mouth Literature Festival in Hull on 8 October, to coincide with the launch of Cliff's exhibition of Hull cityscape paintings at the Brook Street Gallery. The collaboration continues to grow, with new sections composed by Deborah, accompanied by new poems on the maritime themes and connections between Hull and Iceland. The plan is to record the completed work towards the end of the year. 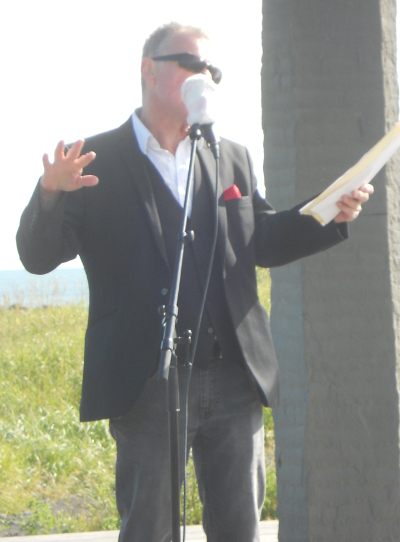